Western Dressage originated or stemmed from Cowboy Dressage and later became two different disciplines. Cowboy Dressage was started by an Israeli man named Eitan Beth-Halachmy. He had a background in Classical Dressage and arrived in the United States in 1967 to pursue Veterinary school... though he really wanted to become an American cowboy. He did not become a Vet, nor did he become a cowboy... but he did become a notable horseman.


With his passion for Western Riding and his extensive knowledge in Classical Dressage he formed his own design of Western Dressage called Cowboy Dressage. He believed every horse and rider needed to incorporate Dressage into their home schooling no matter what their discipline. He believed in his horsemanship and was a pretty entertaining clinician. Soon Cowboy Dressage began to become popular and was included in many stock horse competitions across the country.

Western Dressage became known as Western Dressage when Eitan met another legendary gentleman from the stock horse, reining, and cutting industry named Jack Brainard. He was inducted into the National Reining Horse Association (NRHA) Hall of Fame and named Western Horseman magazine's Man of the Year... you get it... this guy has been a big deal in the industry for over 55 years.

Jack is a big fan of "firsts," hence his participation in starting the NRAH. When he met Eitan in 2007, they joined forces and teach what is now called Western Dressage across the country. When you combine the years of earned knowledge, expertise and savvy between these two men you have a home run for both the horse and rider. They both now hold Advisory Board Member positions on the Western Dressage of America board.

Okay, so now you know the history of Western Dressage and I am sure you are sill wondering what the heck it is! Well I feel that the WDAA's website describes it perfectly. "Western Dressage integrates the historical validated principles of Dressage with the best of Western Working Horse traditions. It is a systematic and progressive system of training for the Western horse and rider, in the traditional stock tack with the purpose of enjoying a safe pleasurable, versatile and useful working horse. Whether your ultimate goal is in the show pen, barrel racing, ranch work, or trail riding; discover the benefits of Western Dressage in the development of your horse and your partnership."


You read that correctly... Western Dressage is a staple or a foundation to any discipline you train in. Some more little facts about Dressage is that a "Military Test" was included in the Olympics in 1912. After this, Dressage became a civilian sport and the first woman competed in the 1952 Olympics. Dressage literally means "training" in French and is often described as the "ballet of horses."

This all is starting to sound a lot like Classical Dressage... and it is... in a Western Saddle! "Elements of the two disciplines are very similar. Both wish to create a better horse and rider with the use of structure focused training and progressive physical and mental development. Both look for balance, cadence, carriage and shared fundamentals. In addition, each discipline uses tests as an opportunity to evaluate the progress of horse and rider through feedback.

It is not the goal of Western Dressage to create Western horses that compete in traditional Dressage, but to develop better Western horses and offer additional rider education through the understanding and use of principles of Dressage and good Horsemanship." - WDAA website


You have now heard me mention the word "test" a couple of times throughout this blog and I am sure you are possibly wondering what that is. Well "test' is that pre-designated pattern in progressive levels. The tests are used for three years and then the association releases new tests. So about the time you master them, it's time to learn and compete with new ones. Each level, which in Western Dressage we have Introductory (walk/jog), Basic (introduces lope), 1st level ( starting to incorporate maneuvers) through 4th level. In classical Dressage it goes up to Grand Prix, so Western Dressage has a couple more levels to catch up. None the less we are so excited to have 4th level release recently. 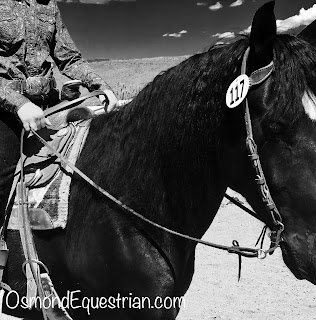 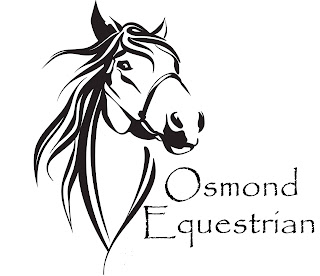 Popular posts from this blog

Don’t Just Warm Up Your Horse 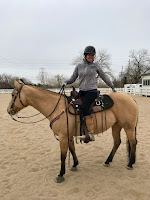 As most know, it is very important to warm up our horses before starting a workout. Just as humans, they too can tear or strain cold muscles. Warming up gives the joints time to properly lubricate and increase circulation to warm up muscles. Although our feet are not making the steps we are still working hard and need to do our part in taking care of our bodies. In this post I will give you some ideas of some simple stretches to do right from your horses back while they are enjoying a free walk. These stretches should not consume more than a lap or two of your warm up walk. Stretch #1: Shoulder and Rib Cage Place the reins in the left hand with a loose contact. With your right hand, reach up your horse’s neck toward his ears and feel the stretch through the latissimus (lats). Now raise the arm straight over head, rotate it past your ear, rotating through the rib cage to place your hand on your horse’s croup (top of the rump). Slowly rotate the rib cage with deep breaths. On the
Read more